But also, I’m a writer, and I do this thing where I like to give you guys a preview of a WIP

I’m working on, so I thought for today, that’s what I’d offer you.

This story is essentially a mystery, and while I’m working out all the quarks and oddities, it will be up on Wattpad and Inkitt in the next week or so.

But, before we get into this story, I wanted to say that todays post is sponsored by Skillshare. Skillshare is an online learning platform that gives you access to hundreds of classes for the low price of just 10 dollars a month. Sign up today to get your first two months, free! 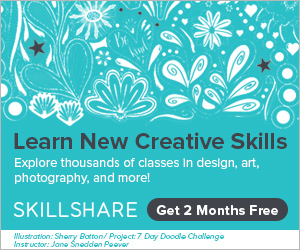 “Oh Azania, excellent, it’s you.” Mother glanced up at me from her end of the table everybody in the room turning to me. “I’m glad you made time in your seemingly busy schedule to see me during a meeting.”

“Oh please, Gwendalon, it’s always a lovely surprise to see Azania.” Mr. Graid, one of her investors, moved his hand toward the small of my back.

“And it’s always a pleasure to see you Mr. Graid. How unfortunate of the age difference, and the fact I have a thing for men with more tact…and class…” I gave a tight smile, reaching back I grabbed his hand. “What was it you wanted?”

“Well dear if you must know at the most importuned time I’ve found you a job.” She drummed her fingers on her desk. “You know our bellboy that was working for the buffalo police department?”

“Considering I just finished an eleven-year war with the original one, no. I usually avoid them.” I dropped Mr. Graid’s hand, I dropped in a seat several away from him. “So what about the bell boy?”

“Well, he was a temporary replacement, we were helping him with some start-up business of sorts.” She reached for her pager, “He’s working today, I believe, so I think it’ll be a prime time to meet him, and talk about the positions available.”

“Mother I’m terrible with math-” I pointed my finger at Mr. Graids, who was smirking in my direction “Not that bad, but the point is, I don’t do start-ups. If I wanted a start-up, I’d go and follow my dream of opening a jazz club.”

“Well dear seeing as you have time to sit here and argue with me, rather than soliciting-”

A knock sounded on the door interrupting my conversation.

“Ms. Sharper, did you wish to see the bell boy?” Mother’s secretary, Mars, asked, leaning against the door frame.

“Mother I am not into being a rich fund for some guy who doesn’t know how to put a little change-” I stopped as soon as the boy stepped in.

Well, if “boy” was the proper word. At six foot two, and dark messy hair, he certainly was a charmer-in an awkward sort of way.

I sat up some, uncrossing my arms. “I’ve changed my mind, it sounds like a lovely idea.”

“Yes, I thought as much.” Mother turned to him “Mr. Yedgerson, perhaps you should take this chance to pitch yourself to the board, and perhaps my daughter, though I can tell that she’s already won over.”

“I-I wasn’t prepared for this.” He stammered, rubbing his arms self-consciously.

“That’s what we all say when Azania shows up, she has a tendency to live in an impish dream that the world revolves around her, and her time.” Mother crossed her arms. “Go ahead, a good businessman should take any chance he gets to show himself.”

I rolled my eyes, grabbing a water bottle from the tray beside me. “I’ll be back.” Making my way through the crowd of board members, I grabbed Yedgersons arm, pulling him out the door, I shut it behind me. “What’s your name?”

“Ace Yedgerson; I’m sorry, I don’t think that I made myself clear to your mother-”

I nodded, brushing a few strands of hair out of his face, I jerked off the jacket.

“H-Hey-” He watched as I grabbed the jacket off my mother’s secretary. “I need a safety pin, Mars.” Mars nodded, handing me one as he pulled another jacket from his drawer, as well as a portable steamer.

“It’s a power move, and while yes, I did show up in the middle of a board meeting, she’s trying to make a point. What’s your company?” I handed him the jacket, undoing the safety pin, I fixed the jacket so that it hung in a more fitting way.

“It’s a Private Investigation organization.” He pulled a container of hand sanitizer out of his pocket, opening it as I opened another one of Mars’ drawers, pulling out hair gel. “Is your hair naturally unruly?”

“Not important how long have you been apart of the Police Department?”

“How long exactly?” I pressured, grabbing the tie Mars had held out for me.

“Good talk fast enough and we can get away with five years.”

“The head detective-” He grimaced as I ran my fingers through his hair, working the hair gel in.

I turned to Mars, who handed me a container of breath mints. “Pull up information on Detective Cooper from Buffalo Police Department.”

Ace frowned “Why are you helping me with this?”

“Mars and I have spent what-almost 7 years pulling people out of situations that my mother has put them in?” I grabbed the phone from Mars, stepping away.

“It’s your one chance to make an impression if you clean up quick, let Zanie work her charm and roll with the punches, you’ll have several investors eating out of the palm of your hand.” Mars explained “Ms. Sharper views herself as a goddess, she likes to make you think that you should be so lucky as to be in your presence. The only thing she loves more then her hotel chains is Zanie, even if she does show it in a distant-”

“Mars not now!” I called, just as I dialed the number Mars had pulled up. “Detective Cooper, hello, it’s Zanie.”

“I’m sorry?” His voice sounded over the phone, sounding uncertain.

“Oh don’t tell me you’ve forgotten already.” I examined my nails. “I could hardly forget the false alligations you tried to make against me.”

“Sweetheart, don’t think you’re lucky to breathe my first name, let alone use it in full.” I scoffed, putting my hand on my hip. “Listen, quick favor, give me information on Ace Yedgerson.”

“Good, right?” I pressed, not bothering to let him state too much.

“He was actually on the case with your friend.”

“Oh was he? Funny how he’s no longer working there, did you get them to sack him too or was it because he was smart and walked away?”

“Miss Sharper, I don’t appreciate what you’re implying.” His voice lowered some, footsteps in the background.

“And I don’t appreciate you, at all, but alas I’m still having a phone conversation.” I started slowly back toward Mars and Ace. “So what-say? Excellent, hard worker, from you and everybody else?”

A heavy sigh came on the other end of the line. “Indeed, Ms. Sharper.”

“Good, talk soon, don’t falsely accuse anyone while you persist on being a shady pi-oh did that almost slide out?” I scoffed “Have a good day.”

I nodded, sitting on the edge of his desk as I examined Ace. “Before I go in there, I want you to promise something to me.”

Ace gave me a curious look, adjusting the tie Mars had handed him. “What would that be?”

“You investigate something for me.”

He hesitated, before nodding.

I mean, to be frank with you do people actually read these? Undecided. I do know it's an excellent thing to write when you're trying to procrastinate from literally anything else. Technically I'm supposed to write on these for another obligation but you know what-we'll procrastinate on that one too. Mainly because people will be reading and judging that one. Though if you've gotten this far it's probably because you're genuinely hoping to find information about me, and to put it simply, there's not much to tell. I'm a fairly average person who prefers to have panic attacks about small things, and then when something's big I say "ah screw it" and move on with my life because who has time to dwell, not me that's who. Not with college and other stressful life requirements like not procrastinating on things. But in all seriousness, if you have made it this far, kudos to you. I'm H.A.Ivy, or Ivy, or Hazi or random girl that should shut up. I'm old (there's still a "teen" slapped after my age number so I'll let you figure it out), I enjoy writing, playing video games, and annoying my family. And of course, my ultimate goal is to take over the world, after I finish whatever this is. View all posts by H.A.Ivy

Come, join me on my journey..

Just another girl who wants to rule the world...